Inspired by International Women’s Day on March 8th, I watched Amanda Vickery’s three part programme : ‘ Suffragettes for Ever – the Story of Women and Power’, on BBC 2. 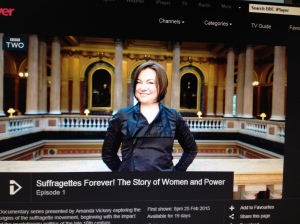 I think she’s an inspiring presenter, down to earth, bringing to life the milestones in the story of women claiming their power. The women featured were fiery in the face of a very reluctantly conceded power by the Establishment. One astonishing fact I learnt was, that an assault on a woman in previous centuries was classed as ‘trespass’ because the woman was seen as her husband’s property. The hard won victory of universal suffrage reminds me how precious my vote is. A contemporary feminist is Chimananda  Ngozi Adiche – Nigerian author of’ ‘Purple Hisbiscus’ and ‘Half of a Yellow Sun’. Watch her YouTube talk -‘We Should All Be Feminists’.https://www.youtube.com/watch?v=hg3umXU_qWc

Change of subject – drawing class, stories myths and imagination- Fairy Tales. What shapes our imaginations ?The landscape of my imagination was shaped by stories read to me as a child -‘The Treasury of Tales for Little Folk’, full of Grimms Fairy Tales. I blithely listened to stories such as ‘Red Shoes’, about a little girl who fell in love with her beautiful red shoes. She wouldn’t take them off, even for her mother’s funeral, so the shoes became bewitched as a punishment and wouldn’t let her stop dancing. So finally her feet were chopped off ! A new complete first edition of ‘The Original Folk and Fairy Tales of the Brothers Grimm’, translated and edited by Jack Zipes, came out, I wondered how would they would be different to the edited 1857 version of my childhood. Original tales are from 1815. 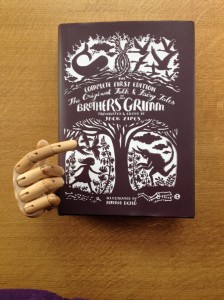 They are plainer, not moral like the edited version of Christian  homilies for children. I like these stories for their ‘underdog perspective’ .The translator says -‘There is almost always a clear hostility toward abusive kings, cannibals, witches, giants and nasty people and animals.. And a clear sympathy for innocent and simple-minded protagonists.’ Cinderella for example. I imagined what would happen to me when by mistake I sprayed some picture fixative on the floor of the studio, shared by an art class and a drama group.

I enjoy making quirky and kind observations about other peopleand about places. I write short word sketches about certain situations that feel significant to me, I draw little cartoons. I reflect on particular t.v programmes, films and books as they grab my interest

One thought on “Fiery Women and Fairy Tales”

I enjoy making quirky and kind observations about other peopleand about places. I write short word sketches about certain situations that feel significant to me, I draw little cartoons. I reflect on particular t.v programmes, films and books as they grab my interest

francineangelcakes.com and Woman Walks Dog, November 2014 til the present. Unauthorised use and duplication of this material without express and written permission from this blog’s author and owner is strictly prohibited. Excerpts and links may be used, provided that full and clear credit is given to francineangelcakes.com and Woman walks Dog with appropriate and specific direction to the original content.